TEN YEARS OF GUANTANAMO, 2012
One hundred seventy-one Muslim men, many of them locked up for 9 or 10 years, almost all without being charged with any crime nor brought to trial, are still at Guantanamo. The U.S. Congress has made it almost impossible for any of them to leave, even though 89 of them have been cleared for release by either the Bush or Obama Administrations. For the misfortune of being picked up on a mistaken suspicion, or handed over to U.S. military for a $5000 reward, these men have not seen a single relative or friend since being strapped to the floor of a cargo airplane, hooded and shackled, and flown to Guantanamo Bay, Cuba. 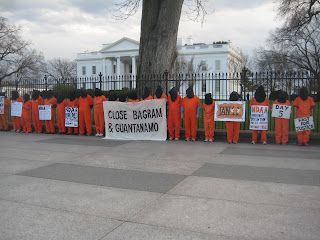 For more than two years only the Red Cross was permitted to see them, and the conditions they found were so deplorable that the Red Cross broke with their own policy and spoke out about it. It was only after the photos of torture at Abu Ghraib prison horrified the conscience of the world that, at the end of 2004, the first lawyers were able to visit the detainees. Now they all have lawyers, but they don't have justice.
This is what provoked me to join Witness Against Torture to fast for ten days, to vigil, to demonstrate all over Washington DC, and finally to get arrested in a desperate effort to change policies that mock the rule of law, violate American values, and breach universal concepts of justice and morality. No country in the world will admit that it tortures, but many do, our government among them.
We have tortured the men at Guantanamo and continue to do so at Bagram Prison in Afghanistan. We have secretly sent our captives to third countries to be tortured (termed “extraordinary rendition”), and we openly use indefinite detention and solitary confinement for prolonged periods in order to break the spirits of our victims.
These are shameful practices. I am ashamed of my government. But I believe change of heart and law is possible. I believe in our goodness. For this reason I have put on the orange jumpsuit and black hood of the Guantanamo detainee and joined daily processions through the streets of the Capitol. For this I joined the Fast for Justice, as 100 citizens around the country gave up solid food for 10 days to mark the 10 years that Guantanamo has been open. I was willing to be hungry, tired and cold to remind me of the suffering of men we have tortured.
While we fasted in solidarity with the men who see no way out of Guantanamo, they heard of our gesture and felt a glimmer of hope. They sent us the message that they would join our protest by refusing food for three days, January 10, 11 and 12 I will remember this when I next wonder if my actions make any difference. Even a small light shines in the darkness.
There were 45-50 people in the Witness Against Torture circle housed in a church basement, where we built community among ourselves, made our daiy plans and got ready to commemorate the tenth anniversary on January 11th along with Amnesty International, the Center for Constitutional Rights and the National Religious Campaign Against Torture. We were encouraged by the knowledge that in 350 other cities across the country and world there would be simultaneous demonstrations demanding to close Guantanamo and Bagram, end indefinite detention and stop torture.
Maybe it isn't self-evident why torture of one's enemy is so unacceptable. Maybe we have heard the word so often that we no longer give it the weight it deserves. We have been inured to its use by watching fictionalized TV shows about it. The state changes its name to “enhanced interrogation” and tells us that it makes us safer, instead of denouncing is as fundamentally immoral. Torture is not just one human making another suffer excruciating physical or emotional pain, it is also a destruction of that person's ability to trust that there is any safe place or safe person. He becomes perpetually afraid. This has a devastating effect on his family and community as well, as some bond that normally ties people together is broken.
The longer Guantanamo is open, the more used we get to putting accused, "suspected" people beyond the reach of justice. Now Obama has signed the National Defense Authorization Act which authorizes the U.S. military to detain U.S. citizens anywhere on suspicion of wanting to harm this country and hold them without charges or trial for an indefinite period. What happened to many of the men in Guantanamo can now happen to any of us. Someone doesn't like you; they report to the police that you might be doing something Un-American; your home is surrounded in the middle of the night; you are taken to a holding cell and then a prison; you do not know what you are accused of; you are not let go for weeks, months, years... If you do not cooperate, you might undergo enhanced interrogation and be put in solitary confinement. Does this sound like America?
Protesting Guantanamo, fasting, getting arrested are our attempts to lift the veil that clouds our nation’s collective vision and begin a process of redemption.
January 14, 2012
Posted by Sherrill at 2:58 PM